The August statistics are out from the Greater Vancouver and Fraser Valley Boards. As predicted, in many areas there has been a dramatic decrease in sales volume. Much of the drop can be attributed to the Foreign Buyer Tax that the BC Government implemented recently.
Because of this radical change in the real estate landscape, most people are waiting to see how this market will recover. I spoke with one seller recently that just put her house on the market in the formerly hot area of North Burnaby. She said that a few neighbours of hers had sold in the last few months and they had a sold sticker on their sign within a few days. In contrast, her listing is just sitting on the market with no interested parties even bothering to tour the property.
The more sensational media outlets, of which there are more and more lately, are suggesting that prices are dropping as much as 10% in the marketplace already. They are erroneously using average prices rather than median prices to substantiate their statistics.
As well, with much lower volumes of single family homes being sold, it is impossible to be certain that the sold homes are representative of the average. They could be in very poor shape or be on a busy road, etc.
Here is an exaggerated example of why average prices are not reliable measures of the market:
Consider that the following properties sell in a given month:
House A: $5,000,000 or $5.0M 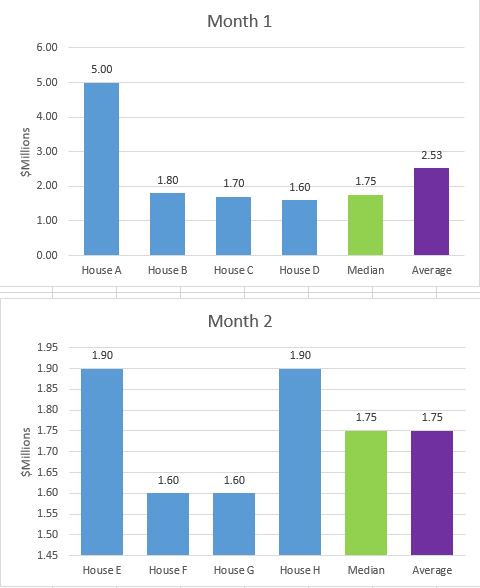 House B: $1,800,000 or $1.8M
House C: $1,700,000 or $1.7M
House D: $1,600,000 or $1.6M
The average of these property sales is: $2.53M. The median price is $1.75M.
Imagine that the following month, the sales are:
House E: $1,900,000 or $1.9M
House F: $1,600,000 or $1.6M
House G: $1,600,000 or $1.6M
House H: $1,900,000 or $1.9M
The average of these property sales is: $1.75M.
At first glance, it seems as though prices have fallen dramatically as the average has dropped from the previous month from $2.53M to $1.75M. The main cause of the skewed numbers is the inclusion of the one luxury property.
In a market that is seeing the majority of higher priced properties selling to foreign buyers, the loss of those luxury sales caused a large drop in the average pricing in the market.
In this hypothetical situation the median price is $1.75M which shows that the market stayed the same. Of course, that kind of news doesn’t sell newspapers and won’t cause people to click on articles online.
I wish I had the foreknowledge of what will happen in the near future. An educated guess would be as good as some of the predictions made by economists in the last 5 to 10 years. To their credit,  it is very difficult to predict as there is always the chance of a random macro-economic policy change or event that can drastically alter the course of the Vancouver real estate market.
When you look at the potential factors that could influence real estate appreciation, these are the ones that come to mind first, (in no particular order):
1)      Immigration – With the continuation of the Quebec Investor’s Program, there doesn’t seem to be a shortage of financially well-off people that want to settle in the Lower Mainland. 93% of the immigrants that enter through that program have a BC address. Tens of thousands of immigrants per year are expected to move to Vancouver each year in the coming years. They have to live somewhere.
2)  Provincial migration – Since the collapse of oil prices worldwide, it has seriously hurt the oil industry. Many former BC residents that moved to Alberta for the lucrative job market are starting to return.
3)  Currency valuation – The drop in the Canadian dollar in respect to other currencies worldwide have made Canada’s real estate market more attractive.
4)  Interest rates – Historically low interest rates have allowed massive levels of leverage for homeowners and investors alike. A rate hike of 1% could cause a typical $500K mortgage payment to rise by 11%.
5)  Lending policies – Our lending policies, although quite restrictive compared with many other countries, underpin one of the strongest banking systems in the world. This means that the potential for large numbers of foreclosures such as what happened in the US banking crisis are less likely. The combination of ARM’s (Adjustable Rate Mortgages -  Mortgages which have an initial low “teaser” rate which then jump to a much higher level after a specified period of time) and subprime lending practices (poor credit risk customers) was a disaster waiting to happen in the housing crash in the US.
6)   Inflation – This has been humming along at about 1.5% to 1.7% per year. Of course, we’ve noticed a much higher cost at the grocery store in the last few years as our weak dollar has caused imported goods to be much more expensive.
7)  Quantitative Easing – Our government may to decide to start the printing presses to counter our dropping interest rates, which will devalue our currency.
8)  Changes in legislation/changes in government – This has never been more apparent than what happened here in BC with the Foreign Buyer’s Tax.
9)   Scrutiny of Real Estate deals by the CRA – There have been many stories in the media lately about how unscrupulous real estate investors are skirting the tax laws to make hundreds of thousands of dollars, tax free. This could spook many of these types of players that, through their actions, may have been inflating prices in the market. Without them, the market will should be less volatile.
The current slowdown in the market has created some anxiety in the minds of many current homeowners but, unless there is a compelling reason to sell, many won’t, especially for those buyers that purchased within the last year or so. Another percentage own their home outright. If they feel that they have missed the top of the market, they can wait until it goes up again.
For the reasons above, I don't expect an overnight drop in value as we saw in the housing crisis of 2008.
As well, Vancouver doesn’t rely on a prime industry such as a city like Detroit did with the auto industry. Our economy benefits from tourism, high tech, the film industry, our seaport, and the fact that we are the terminus of our transcontinental highway and rail systems. (just to name a few…) This has created a fairly strong job market compared to many areas of Canada.
In conclusion, I believe that the Vancouver real estate market will have a tumultuous few months but will settle down to “business as usual” albeit without the enormous month-over-month gains that we’ve seen in the last two years. With the potential for less speculators in the market, we should see a return of the buyers that were chased out of the market in previous months and years because of the intense competition.
As usual, if there is anything that we can do for you, please don’t hesitate to contact us.
This website is presented by Barry Fence, Olga Pryce, and Alice Wong from Oakwyn Realty Encore.